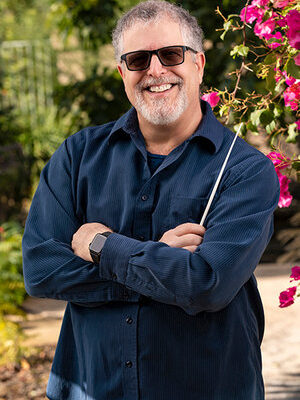 Colorado native and five-time Emmy-award-winner Steven Bernstein started his formal music training studying piano at the age of five. After considerably more training and a move to Los Angeles, he has  become a multi-hyphenated composer-orchestrator-arranger-conductor-singer…and occasional-actor.

Bernstein began his professional music career in Los Angeles, receiving commissions to reconstruct and  re-orchestrate some of the world’s most beloved film music, the scores for which have been lost or  destroyed. The reconstructions include music from such classics as The Wizard of Oz, Gone With the Wind, It’s a Wonderful Life, A Christmas Carol, Around the World in 80 Days, The Searchers and The  Bride of Frankenstein. Because of this work, he was featured in a PBS News report on the preservation of  film music.

He is perhaps best known for his music for animation. To date, he has written the scores for over 250  episodes of animated television series and feature-length films. The series include such titles as  Animaniacs (the original and the 2020 re-boot), Pinky and the Brain, Freakazoid!, Histeria! and Taz mania! He wrote the scores for the features Scooby-Doo: Arabian Nights and A Flintstones Christmas  Carol and co-wrote the scores for Wakko’s Wish, A Pinky and the Brain Christmas, and the Tiny Toons  specials It’s a Wonderful Christmas, Night Ghoulery and Spring Break.

Collaborations with his wife, composer Julie Bernstein, (besides their awesome kids) include the Make  Way for Noddy series and specials, the Baby Looney Tunes series and Easter special, songs and  arrangements for the live-action comedy sketch show Studio C and the opening song for Toonsylvania.  For Kid Rhino Records, they co-produced a CD of songs inspired by the feature Tweety’s High-Flying  Adventure, performing on, and writing music and lyrics for, much of the album.

His film scores span genres from horror (Blood Lake and Pernicious) to documentary (the award-winning  Mr. Fish: Cartooning from the Deep End—of which he is so proud to be a part) to romantic comedy  (Would I Lie to You?). His orchestrations can be heard in such features as Skyfall, The Amazing  Spiderman, Supernova, The Spiderwick Chronicles, Millions, Windtalkers, The Perfect Storm and How  the Grinch Stole Christmas. He has conducted for many film and TV productions including He Named Me  Malala, Spiderman 3, Supernova, Winchell, A Glimpse of Hell and Phantoms. He was the guest  conductor for the Kentucky Symphony’s concert of music for animation and for the Colorado Symphony’s  and La Mirada Symphony’s Animaniacs Live! concert for which he and Julie provided the arrangements  and orchestrations.

Besides his music for the media, Bernstein has received many fine performances of his concert music.  His oratorio To Speed Them All won second place in The American Prize competition in 2015. Also  receiving recognition from The American Prize are his song cycle Emeralds: Poems from Medieval  Ireland, Suite 16 for 2 violins and Hashkiveinu for a cappella chorus, all semi-finalists. Snapshots, a  commission by the YMF Debut Orchestra and co-written with Julie, was also a semi-finalist in The  American Prize and received Honorable Mention in the IAWM competition.

As a performer, Steve provided vocals for episodes of Make Way for Noddy, Animaniacs, Pinky and the Brain, Pinky Elmyra and the Brain, Batman Beyond and Histeria!, as well as the features Wakko’s Wish and Baby Looney Tunes: Eggs-straordinary Adventure and the CDs Tweety’s High-Flying Adventure and jazz pianist Liz Kinnon’s Ms. Behavin’. His enthusiastic but limited acting credits include a cameo in the Wayans Brothers’ Dance Flick and three stints with the Joynt Theater Comedy Improv Troupe.